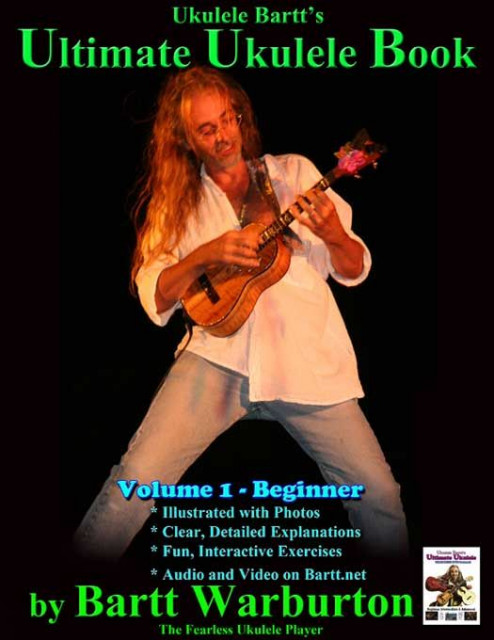 Bartt shows you exactly how to:

When Bartt teaches, you REALLY learn. With a colorful, easy-to-enjoy writing style, and a journalism diploma from UCLA, Bartt will help you become a better ukulele player.

Bartt used to be a beginner, too. He understands how overwhelming it can be. His supportive, original and truly educational instructions will have you looking forward to the next chapter. Bartt tells you how to do stuff. And he tells you very clearly. You will get it!

He’s taught all over the world: America, England, New Zealand, Greece. But traveling doesn’t make you a good teacher. Success as a uke teacher means that your students become ukulele players. Any age, any level – if you fall in love with your instrument, your teacher did a good job. And Bartt’s students span the planet.

There are lots of ukulele players, but there is only one ukulele teacher who has been given a commendation by the mayor of Los Angeles; been named “Teacher of the Year” in America’s second-largest district, the 40,000-teacher Los Angeles Unified School District; and has also been called a “Modern-Day Master” by the Los Angeles Times.

Although this book can be used as a companion to the popular “Ukulele Bartt’s Ultimate Ukulele” DVD, you don’t need to have the DVD. This book is an independent learning tool. Some of the lessons correlate to the DVD, but this book stands on its own. Just like you soon will!

Preview the book, video, audio, and written lessons at Bartt.net